The Nike Kyrie 4 features a black and metallic silver colored upper, speckled midsole and orange outsole. Though he’s been dealing with the injury bug these days, Kyrie Irving‘s sneaker line seems to be doing just fine.

The superstar guard has had a remarkable run of signature sneakers. Thanks to a relatively affordable price point and an insane amount of colourways to choose from, it’s easily among hoops fan favorites.

Speaking of those colorways, the variation strategy isn’t going anywhere, evidenced by this latest iteration of the Nike Kyrie 4. We see the guard-specific shoe take on a Black/ Metallic Silver look. Halloween vibes anyone? 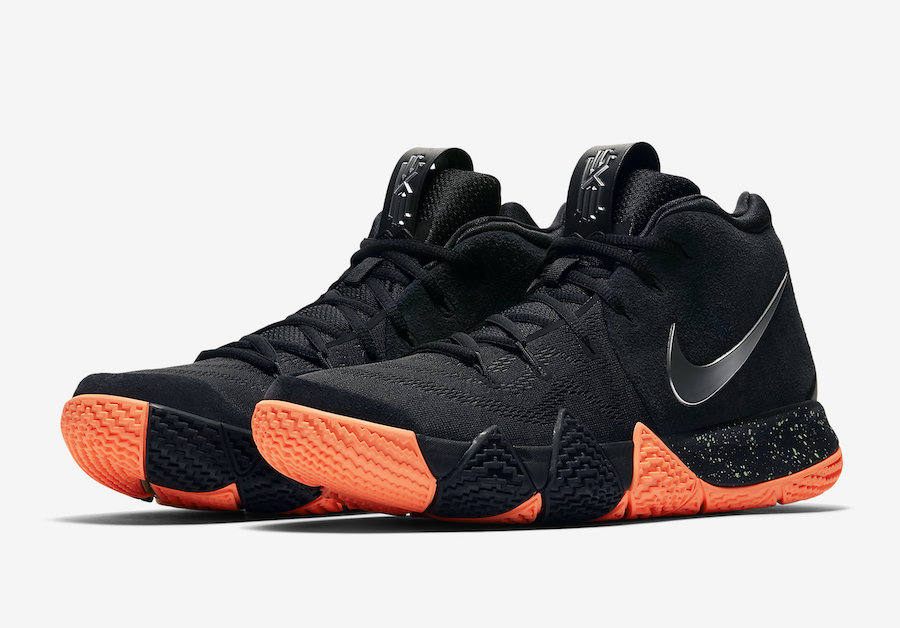 It’s a bit early for the spooky theme, but there might not be a basketball shoe more capable of adopting color schemes than the Kyrie 4. In fact, this is a relatively easy look compared to the Easter or All-Star iterations.

The Black mesh base and Flywire cables are covered here in dark tones. An Orange outsole and smaller accents of Green make for potent contrasts.

Bringing it all together is the combination of a Metallic Silver lateral Swoosh and speckled midsole. The Kyrie 4’s functional build stays the course when compared to its predecessors.

Mesh and Flywire give you that breathability and support to meet both your outdoor and indoor hoops needs. The traction is a world-beating level of grippy.

Unless you’re out there ballin’ in the Baltic or downing defenders in a downpour, you’ll stay on your feet. As for cushioning, this isn’t a shoe you’re buying for impact protection, but that Zoom pod in the heel is just about what most of us will need anyway.

The Kyrie 4’s set-up mirrors the use of foam we see in the series’s 3rd and 2nd models. A snug heel portion keeps you from flying out of your sneakers, a fate we hope you save for your defender(s).

It’s easy to see why the Nike Kyrie 4 has been so popular. Moreover, it’s a good sign for a performance sneaker market that has been struggling. That being said, the appeal is in more than the listed features.

Nearly every iteration of this shoe sports some small detail that alludes to the man himself. Whether it’s a shoutout to his alma mater or a hat-tip to an iconic city, the details are key.

Though this iteration doesn’t boast too much in that regard, it’s a pretty great place to start your Kyrie collection. Check these out today – right-to-left crossovers sold separately!

While you’re here, make sure to also check out about the latest Nike Kobe 1 Protro “Mamba Day”.