Get to know the complete history of the Nike Flyknit Trainer

However, the fact is that the Nike Flyknit Racer would earn a higher profile. The Trainer model does debut as Nike’s first real attempt at an experimental material. It’s even eventually seen on the feet of some global superstars, cultivating its own loyal following.

And yet, the Racer enjoyed a clearly favorable status over its little sibling. Nonetheless, the contrasting popularity doesn’t take away from the historical significance of this shoe.

The all new Nike Flyknit Trainer

The Nike Flyknit Trainer is released during an interesting time. In the U.S., the sneaker community is, at this point, three years into a sort of financial strain. As 2008’s financial crisis resulted in tighter personal budgets for so many, sneaker purchases drop dramatically.

Between 2009 and 2011, budget sneakers – more bang for the proverbial buck – are all the rage. Nike has a much easier time selling a pair of standard Air Force 1’s than anything resembling the sophisticated Flyknit Trainer.

To buy Nike Flyknit Trainer back then just seemed a bit too much. But, as we go into 2012, there’s a growing consumer need for something more.

Thanks to those tight finances, the Swoosh couldn’t really get away with overcharging for new colorways of the same old shoe. Additionally, today’s sneaker price points were largely unheard of at this time.

So, the brand decides to finally let loose a technology they’ve been working on for quite some time. Flyknit is the new, shiny advance in active footwear.

The notion of an entire upper being constructed in a seamless build is nothing new. But, that it is woven and essentially put together via one strand of fabric? That’s a new sort of remarkable. 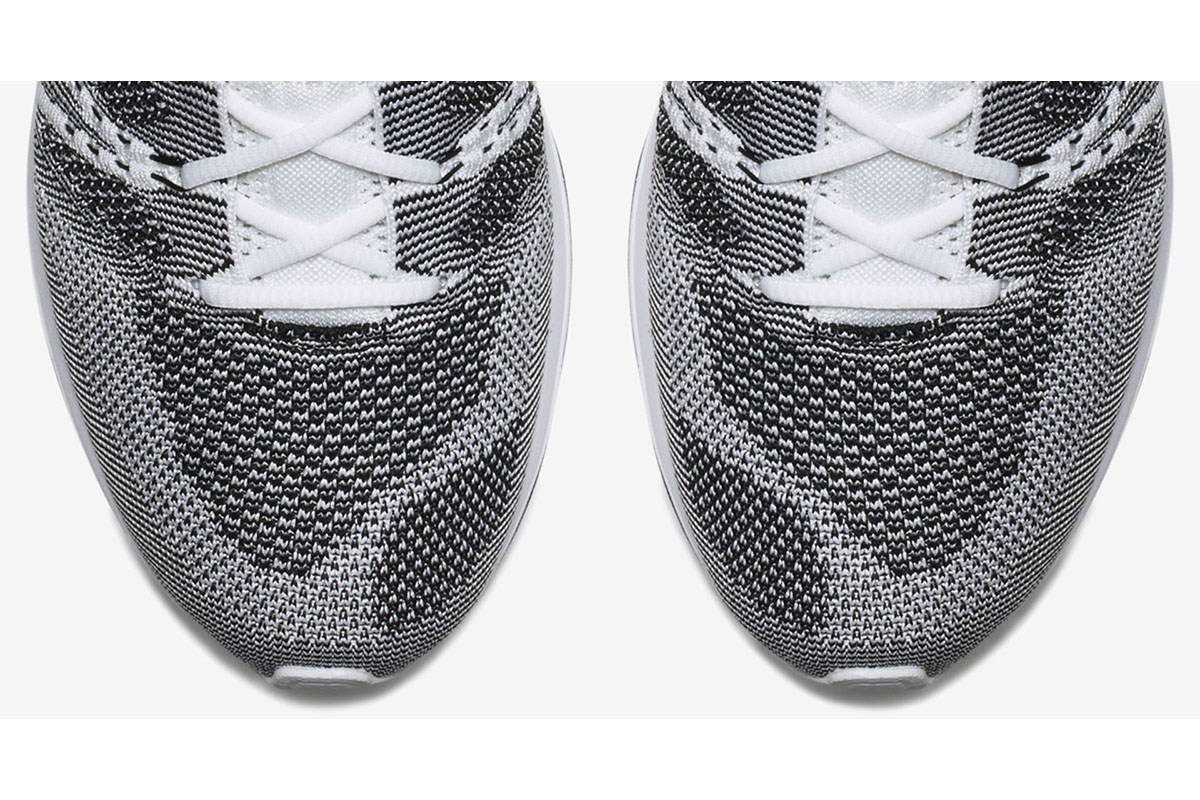 The time had come for some good Nike running shoes

It’s the Swoosh’s official entry into a runners market that has been suffering from a downturn. It turns out that active wear had begun to take a backseat to fashion and leisure.

As a result, the much more prevalent style of the time was that of athleisure. Brands could no longer thrive on the back a performance shoe that wasn’t also ready for a night out.

Again, this is a world-beating new technology that Nike was debuting in the form of a pretty sleek runner. In fact, the brand’s designers even threw on a Lunar midsole, packing on some competent cushioning without compromising the overall aesthetic.

It just wasn’t enough for consumers. The Nike Flyknit Trainer debuts as a dud, followed up by the hype-friendly Racer model.

It’s worth noting that this wasn’t for lack of Nike trying. Some of the more underrated marketing moments for the Trainer involved being seen on the feet of Michael Phelps during the Olympics.

Despite this, the shoe quickly finds its iterations as outlet fodder. But, the Nike Flyknit Trainer eventually stumbles across the sort of luck that every sneaker craves: Kanye West.

The eclectic fashion mogul and musician was struck by the Trainer and was seen wearing it before the end of 2012. This was a crucial moment not just for the shoe itself, but the idea of sneaker consumption as a whole.

Kanye West was still with Nike at the time and he’d decided that he wanted to wear this particular shoe often. Consequently, the Nike Flyknit Trainer got the best celebrity run imaginable, spotted in tons of pics and styled in different looks by Yeezy himself.

What this does is it gives us a new way to look at sneaker drops. Up to this time, the most visuals you get when a new sneaker dropped is a set of product shots – think official Nike pictures or catalog pics.

Kanye takes on the Flyknit Trainer as less of a standalone product and more of a style accessory. The on-foot picture reaches its peak here, effectively becoming an important part of the pre-purchase process.

The Nike Flyknit Trainer comes together with Kanye hype during the early days of another cultural fixation: Instagram. The wildly popular app is only two years old in 2012, the sneaker photography trend yet in its early stages.

Kanye’s prolific styling of the Flyknit Trainer is effectively how the modern sneaker photography on Instagram is inspired. Sure, artists and photographers have been killing the sneaker game with imagery for a long time.

But, a name like Kanye taking on sneakers like the Nike Flyknit Trainer moves proverbial mountains. The shoe’s hype was at critical mass and resell prices for colors he endorsed still show it.

This made it strange to see the shoe stop production abruptly in 2013. Luckily for us, it returns five years later, and we get another chance at owning the original Flyknit sneaker.

Kanye isn’t exactly on good terms with the Swoosh these days, but it wont change how significant the Nike Flyknit Trainer was and still is.